One of my favorite allegories for life in a corporation (or any business), life in a church, or even in a family is the story of the Monkeys and the Bananas.  There are several versions with a few variations, but they all make the same general point. Sometimes we do things without stopping to ask why.  I have been blessed and cursed in life by having the gene that makes me ask “Why am I doing this?  Just because everyone else is?” I also have it’s evil twin gene which makes me rebel against written instructions (are they not just suggestions).  I admit it is driven by pride for I don’t want to be one of the sheared masses. 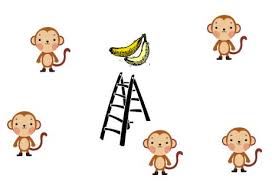 Monkeys and Bananas Five monkeys were in a room that contained a ladder in one corner, and a banana hanging from a string in the middle of the room. The monkeys figured out that if they dragged the ladder to the middle of the room, they could climb up and grab the banana. So they did. As one of the monkeys quickly hopped up and reached for the banana, hidden compartments in the walls suddenly opened, releasing high-pressure cold water that knocked the monkey off the ladder and drenched the other four monkeys. They quickly learned that whenever one of them climbed on the ladder, all of them were soaked with cold water. They realized climbing on top of the ladder was a bad idea. Unbeknownst to the monkeys, the high-pressure cold water hoses were disconnected and removed. The next week, one of the five monkeys was removed from the room and replaced by a new monkey. The new monkey saw the ladder and the banana dangling from the ceiling. Realizing that the banana was there for the taking, the monkey headed for the ladder. But fearful of being drenched by the high-pressure cold water, the other four monkeys pounced on the newcomer and beat the tar out of him. Every time the new monkey got near the ladder, the others beat him up. Soon the new monkey no longer went near the ladder. By the third week, another of the original five monkeys was replaced by a new monkey. And like the monkey the week before, the newest member of the group tried to get near the ladder to move it over to the banana. Once again, the others beat up the newest member of the group. Even the first new monkey joined in. Each successive week, one more of the original monkeys was replaced. The same thing happened every time; when the newest monkey attempted to get near the ladder, the others joined in to discourage him. By the sixth week, not a single monkey was left from the original group. Not one remained that had been squirted with cold water. But when the newest monkey headed toward the ladder and tried to reach the banana, the other four monkeys “trained” him by beating the tar out of him. If you could ask each monkey why it was beating up the new monkey, each probably would say, “I don’t know, that is just the way we do things around here.”